Review for "In the Blood of the Greeks" by Mary D. Brooks 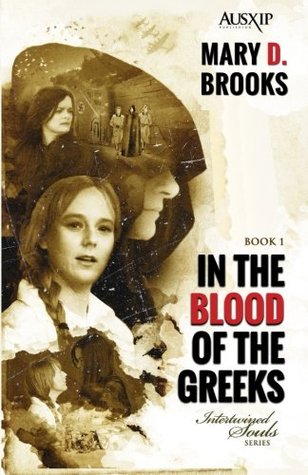 “In the Blood of the Greeks” by Mary D. Brooks

In the Blood of the Greeks by Mary D. Brooks is a riveting tale of the Nazi occupation of a town in Greece during the Second World War. Brooks tells us of the story of a local girl, Zoe Lambros and how her life became entwined with the Greek Resistance and the daughter of a German commander, Eva Muller, and how their actions shaped their small village in Greece. Along the way we meet and connect with many other characters who bring the desperation of war to life, who act and react to the constantly shifting morality they find themselves in.

This is not your average story about war; from the choice of setting the novel in Greece, to the types of characters chosen, “In the Blood of the Greeks” strives to bring a breath of fresh air to the WWII fiction genre. The two main characters, Zoe and Eva, are strong compelling women, different from each other in every way yet destined to be together. The relationship that grows between them melted my heart (Which I will inform you all is no small feat) and Brooks expertly kept up the intensity of their situation and kept the reader holding their breath the whole time. The fear felt real, the love felt real and the sadness that was ever present felt all too real.

There were times however, where the author poured too much into the story. Zoe’s anger at everything and everyone sometimes felt overbearing; she is a rebel, she is stubborn and she does things her way. You get that that is a necessary part of her character, but a lot of times that appears to be her only character trait, and her as a person does not fully develop as far as her potential. The relationship between the two women does also feel like it was rushed towards the end, that the pleasant pace of growth between the two was pushed beyond its means by the end of the book. I do tend to appreciate the build up towards a romance more than the romance itself, so perhaps I am being too fussy here, but despite that criticism their love is the golden apex of a fabulous book.

The best thing about this book in my opinion, is that Brooks has sequels planned, so you don’t have to say goodbye to Zoe and Eva just yet, and if this book is any indication the sequel will be even better. I highly recommend “In the Blood of the Greeks.”

To see more about the author click here
To buy it through Amazon click here
Posted by Lilaina Osborn at 9:00 am