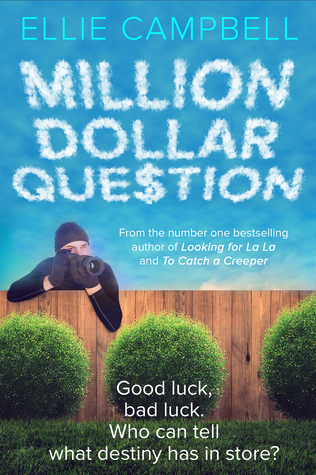 Million Dollar Question by Ellie Campbell brings us on the journey of Rosie and Olivia, two very different people from very different backgrounds, yet somehow their lives continue to cross paths during a very crucial time. Olivia has just fallen prey to a very large financial scheme and lost everything she owned. On the other hand, Rosie, a single mom, has just won a million pounds. As they both learn to live within their new realities, they end up learning far more about themselves than they thought possible.

This novel is definitely a chick lit, but not as chick-litty as others I’ve read. Hopefully that makes sense. Honestly, the novel was just okay. It was a nice piece of fluff, but I found it a touch drawn out for my liking. And I really didn’t care for the writing style, either. The cuts and breakaways made it seems as though when Campbell was writing, she pictured it as a TV show or movie and how they do the dramatic scene cuts to show pivotal plot points. Some people may enjoy that style. I did not.

The characters weren’t too endearing, either. In fact, I may have liked Charlie the most and he was supposed to be the no-good cheating husband. He was the only one who seemed to think and act logically, or like an ordinary person at all. The novel tried to get into deep and thought-provoking ideas with the character of Marcus and his documentary, but it didn’t really work to bring depth to the novel unfortunately. That being said, the twist that connects the two characters was interesting, if not a bit contrived. We often forget, or don’t realize at all, how our lives can connect to so many other people but we just miss each other by mere moments.

Overall, if you want to read a fluff piece, Million Dollar Question is your next novel.