Review for "Triangle: A Memoir of Black Caesar" by B. James Wilson 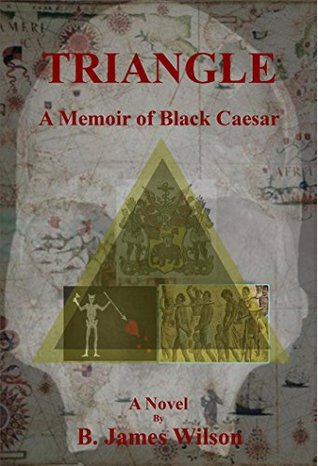 Review for Triangle: A Memoir of Black Caesar by B. James Wilson

Triangle: A Memoir of Black Caesar is the story of a young black man named Nwoye and his rise to become the man known as Black Caesar. Taken captive from West Africa as a child, he navigates his new reality as a slave. His story is intertwined with that of young British Colin Aldworth, the son of a wealthy merchant rising to new heights with the slave trade. He sets his son on one of these slave trading ships to learn the family business, and this sets him on a complex and difficult journey, hand in hand with Black Caesar. We get to see what the world looked like during the apex of the slave trade and see its deep connections with piracy, and Wilson does not hold back in making sure the realities of that time in the world are front and center.

Though I do not have a huge amount of knowledge in the history of slavery I do think the book did a great job in describing the social and economical impacts of the practice. I also have to give Wilson a shout of for his great portrayal of the realities of piracy; one minute you have dispensation from your ruler that you can pillage enemy ships, another minute that enemy is now your friend and you are a criminal, aka pirate. The fluidity of political situations between European powers meant that legitimate merchants or privateers would find themselves suddenly pirates at a moments notice, simply because two powers decided to end a war between themselves. As an extra layer the wealth that became associated with the slave trade fueled most of these hostilities. Its essentially chaos and I think he captured the absurdity of it all fairly well.

However the meat and potatoes of this book is slavery, specifically the fictional story of the potentially real person who was Black Caesar, famed African pirate operating in the Florida Keys in the late 1600's. The Black Caesar of Wilson's imagining is very similar to the supposedly real one; a large imposing man, intent on staying free and creating his own fortunes, but there was more than a splash of a white savior complex when it came to Colin's character. Despite this however I do think Wilson did an excellent job with Black Caesar as a character, fully developing his character and fully realizing the world and context he lived in. The character of Colin too was a delight, and the relationship he had with Black Caesar equal parts heart warming and frustrating; perfect for this book and the mood Wilson sets.

With action, drama and romance, Triangle was a fantastic read from start to finish, and I can't wait to dig into B. James Wilson's other books.

To learn more about B. James Wilson go here.

To purchase 'Triangle: A Memoir of Black Caesar', go here.

Posted by Lilaina Osborn at 9:00 am No comments: