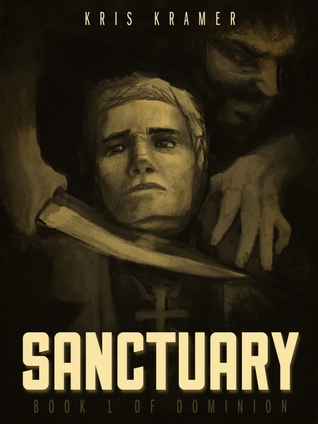 Sanctuary by Kris Kramer tells the story of Daniel, an Anglo living in early Medieval England (Wessex) who lived as a priest. He had run away from his learning in Rome, having questions the other priests couldn’t answer or didn’t want to hear. But when a raid destroyed his village, he found some of those answers in the man named Arkael. Or so he thought. Following this man of God, Daniel travelled across the different kingdoms to find God’s calling for his life. It would all come down to the war Arkael warned him of, the one between the angels and demons. And it would be up to Daniel to find God’s path for him in the war and where he could find his own sanctuary.

I’m often quite critical of historical fiction. I like to make sure the authors have done their research, and I have to say I was pleasantly surprised with Sanctuary. I didn’t fact-check everything, but honestly that’s the best praise I could give. Kramer completely immersed me into the story that I didn’t feel the need to check city names, or the other fine details I usually get caught up in with historical fiction. Despite having a Medieval Studies degree, I found myself enjoying the story for what it was which honestly surprised me. It was a nice reminder back to my university days learning about the Early Medieval period, although I am glad to be done with Old English.

What I found to be flaws at the beginning, ended up aiding in Daniel’s character development so they weren’t truly flaws at all. He was lost, empty, and perhaps a bit naive but after watching the destruction of his village, that only made sense. His determination to follow Arkael only further showed his faith in God and His plan for his life. Arkael had been sent as a sign, and Daniel had to find out what it all meant.

I’m glad that Daniel was able to find what he was looking for, and I think even though I wouldn’t necessarily consider this Christian fiction (but perhaps it is! It’s all in your definition) it has a very strong theme of faith. It’s Daniel’s quest to discover who he is, and how he fits into the world that is so very relatable to both believers and non-believers.

Although I found it a tiny bit slow to get into, I honestly really enjoyed reading Sanctuary and it was a nice change of pace from other historical fiction novels I’ve read. There aren’t many written in this time period, and although there was of course fighting and death, it wasn’t the main plot of the story which goes against much of what people think of this time period (the so-called “Dark Ages” as I shudder to type). I highly recommend this novel to anyone with an interest in the early Medieval period, the early church in Briton, or are simply on their own quest like Daniel. We are all a piece to the same puzzle, and in the end, like Daniel, it’s our hope we can discover where we fit and maybe in that moment we find our own peace, our sanctuary.
Posted by N.M. Sotzek at 9:00 am