Review for "For my People: Awacha Nay" by Heidi Ennis

Review for " For my People: Awacha Nay" by Heidi Ennis 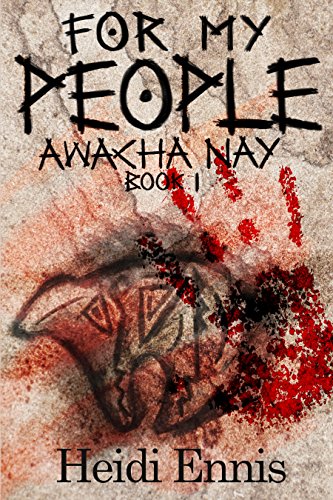 For my People: Awacha Nay is a story of the land around what is now the Columbia River in the Pacific Northwest of the United states. It starts during what is assumed to be the last ice age where early aboriginal people are trying to survive in desperate environmental conditions. These scenes act as flashbacks to a time just prior to European contact, and tell the story of a leader of one tribe, fighting against everything to provide for his people. Witnessing these events is the main character Asku, a descendant of the chief Saigwan who led his people through disaster. Asku is the eldest son of the current chief and is receiving visions of the former chief of their tribe Saigwan. Through these visions Asku learns about what it takes to become a chief, and when his tribe is threatened he must use what he has learned to help his people.

This book was a lovely read, and really got me emotional in places. I have no idea of the background of the author; whether or not they have an indigenous background, but it does seem well researched, and I appreciated the inclusion of a lexicon for words at the back of the book. I normally struggle a bit with main characters that don't have much in common with me; Asku is a young boy, living in around the 1500's (my estimate) who is indigenous to North America, and is the eldest son of the chief of the tribe. In comparison I am a woman in my thirties who is not Indigenous to North America, and I do not have any parents in any position of power that I would inherit. Seeing the differences between us, I could sympathize, but not really empathize with the struggles and issues facing Asku, but as a testament to Ennis' skill I found myself constantly feeling the pain he felt during difficult times, the worry he felt when it seems like so much was placed on his shoulders. The joy he felt when he kissed a girl for the first time. Ennis really did a great job in allowing me, the reader, to be able to understand the main character, despite our long list of differences. Ennis also wove the flashbacks in the story so artfully that it enhanced the read, rather than distract, or worse, confuse the reader.

Overall this was a delightful read. Any book really that can start to make me cry I think is a pretty powerful one, because that's not an easy task. Interestingly enough the end of the book is probably my favourite part, because it gave me just a hint, a little flavour for what would come next in Asku's life, and honestly I don't know what I want more; Ennis to make a sequel or not, because I think leaving the ending hanging just a bit is a fantastic way to leave a story, because it lets you imagine the story from that point onward, making it a book that keeps on giving.

To learn more about the author, Heidi Ennis, you can go here.

To purchase this book, go to Amazon.

Posted by Lilaina Osborn at 9:00 am